Rana Ahmad, (Author) women’s rights activist and Speaker ,Refugee worker , Atheist, fled from Saudi Arabia in 2015 and came via Turkey, Greece and the Balkan route to Germany, where she now lives. She was given support for her dangerous escape by the Richard Dawkins Foundation , Central Council of Ex-Muslims, Atheist Republic and Faith to Faithless, and belongs to the Arab Atheist Community. founded the Atheist Refugee Relief e.V.in March 2017,in Germany.

Different information about Asylum and the organization that may help you.

Learn or Study from where you can start, language, physice, Math ect..

Articles, video, and everything about my activest​

What I have done until now, my work.

Information on the Asylum Procedure 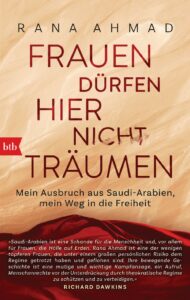 Interested in helping or have a question? Please leave a message below.